Last week I read two novels about young women who drink.   The first was My Name Is…  by Alastair Campbell, and was published a few weeks ago.  The second was written between the wars by Patrick Hamilton, and is called Twenty Thousand Streets Under the Sky. Both contain the stories of young women who drink uncontrollably – Hannah in My Name Is…. and Jenny in Twenty Thousand Streets. 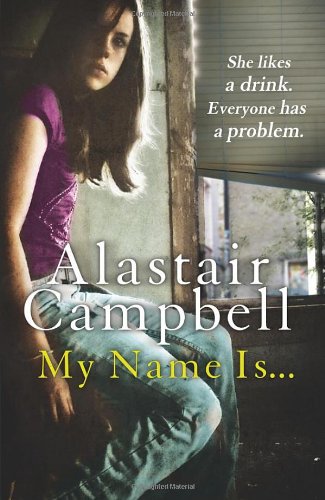 My Name Is…. is very good in so many ways.  It captures many of the aspects of drinking which spirals out of control which are so difficult for those who don’t have problems with alcohol to understand.  I was sceptical that Campbell would be able to capture what it’s like for a young woman who drinks, but he does, partly because every chapter is written from the perspective of different people involved with Hannah’s life, until the last chapter, where the voice is, of course, Hannah’s.  In particular I think he understands and communicates how for many young women drinking and its related problems are actually rather passive: they drink because the alcohol is there; and they end up in relationships where they are exploited and where they do the exploiting because these are routes to further drink and a way to continue the life they’ve found themselves living.  The other thing I think Campbell shows us brilliantly is how others are drawn to young women who drink, and how they become entangled in their problems.  There is something about many young women who drink which burns more brightly – the perceived danger and the deviance is attractive, and women whose inhibitions are loosened through drink are rarely without company, at least not until their drinking starts to impact others negatively.  Then of course there is the desire in others to scoop up and rescue the drinker, elevating themselves to hero, saviour and benefactor.  My Name Is… contains others in both these categories. Where the book is not so good is that at times it is a bit of a blunt instrument, telling us what it’s like for this young woman, rather than showing us.  Having said that, I have read comments in reviews and on twitter which claim this book should be required reading, and there is a part of me which agrees with that.  For some, a blunt instrument is absolutely necessary to get the message across.

Twenty Thousand Streets Under the Sky does it differently.  Patrick Hamilton presents us with a trilogy, in which his woman drinker, Jenny, is a prostitute.  She appears in the first section as the object of someone else’s affections,  and we watch as she exploits his infatuation with her and systematically takes him apart, until he is left with no money and no option but to leave his present life and start again elsewhere.  However, in the second section, Hamilton takes a step back, and tells us how Jenny got there, and the way alcohol grips Jenny from the first drink is vividly told.  She loses her job as a maid almost immediately, as a direct result of her drinking.  She is mortified from her very first drinking session, waking up in a strange bed and not knowing how she got there, with hazy memories of car rides and accidents.  She deals with the shame by accepting another drink, and another, and another – passivity again.  Her situation is made worse by her uncommon prettiness – as with Hannah, she attracts people, although in Jenny’s case this is predominantly men.  Some want to save her, and these she exploits to pay for her drinking, but the majority want to exploit her, and this she lets happen, in return for more drink.  I loved this book.  Even the pub a lot of it is set in, the Marylebone Bell, feels like a living, breathing character, and there is an accompanying cast of smaller characters which are beautifully drawn.  Hamilton does the minutiae and desperation of everyday life brilliantly.

Reading the two consecutively (Campbell first, Hamilton second), I was struck not only by how there are different ways to tell the same story, but by how those different ways will speak to different people.  Campbell will reach an audience Hamilton never could, not only because of who he is, but also because of how his book is written.  Hamilton gives us a harder read – it’s longer, it’s dense, and it requires more emotional involvement, but the payoff for the effort is well worth it.  Hannah and Jenny are two sides of the same coin, albeit that the futures for the two women look very different.  Jenny is lost to poverty, and no-one is looking out for her.  For Hannah however, there is a chance of recovery, although Campbell knows enough about drinking problems to leave the ending hanging.